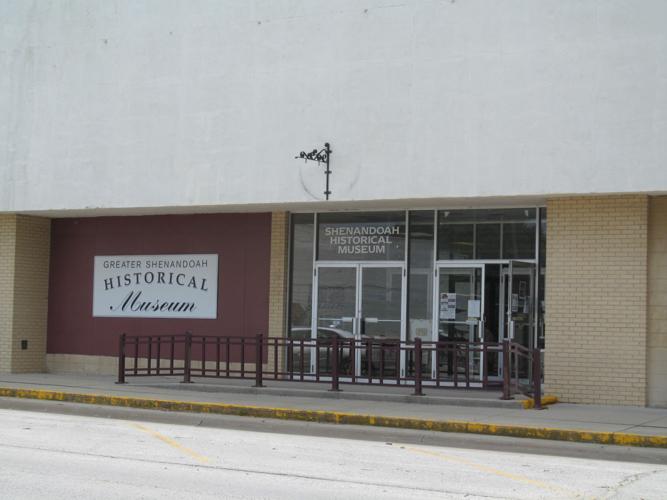 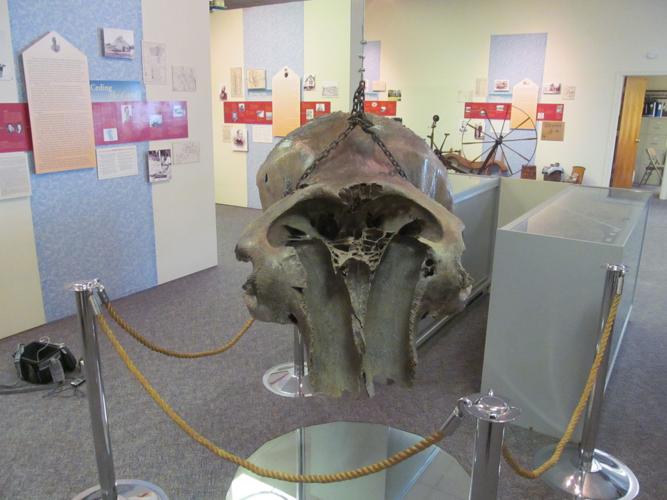 Long before Mustangs and Fillies roamed Shenandoah, mammoths populated the community. This giant mammoth skull--otherwise known as Homer--is on display at the Greater Shenandoah Historical Museum in Shenandoah. 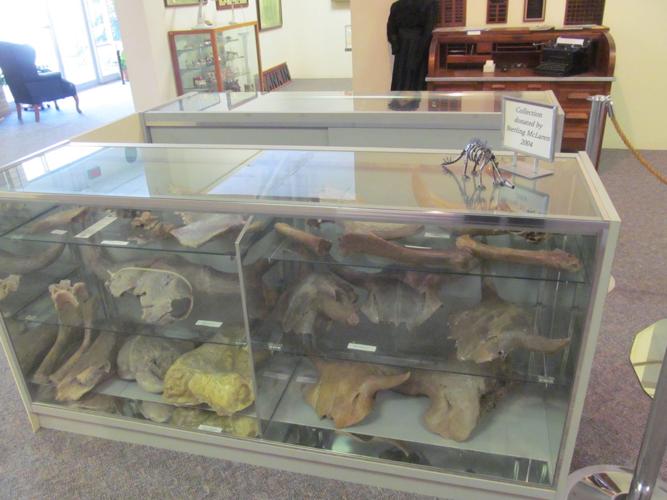 A large display of fossils from digs near Shenandoah over the past 15 years is featured at the Greater Shenandoah Historical Museum. 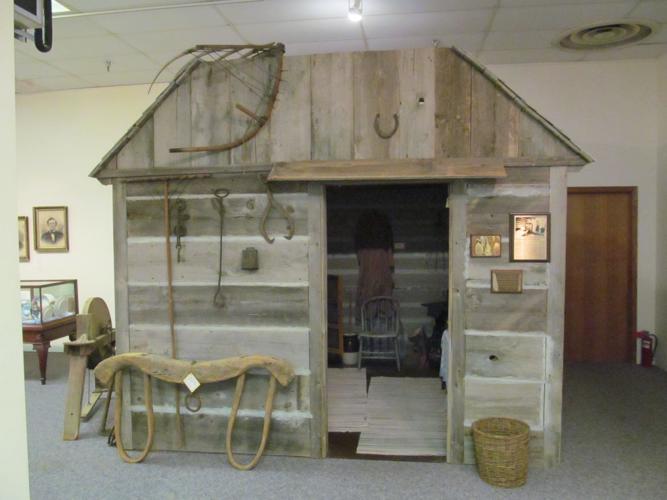 This replica Mormon settlement cabin--similar to those that used to be found at Manti Park--is on display at the Greater Shenandoah Historical Museum. 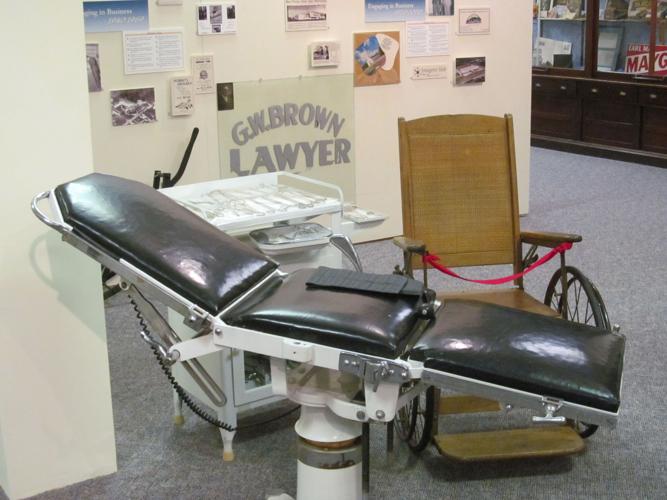 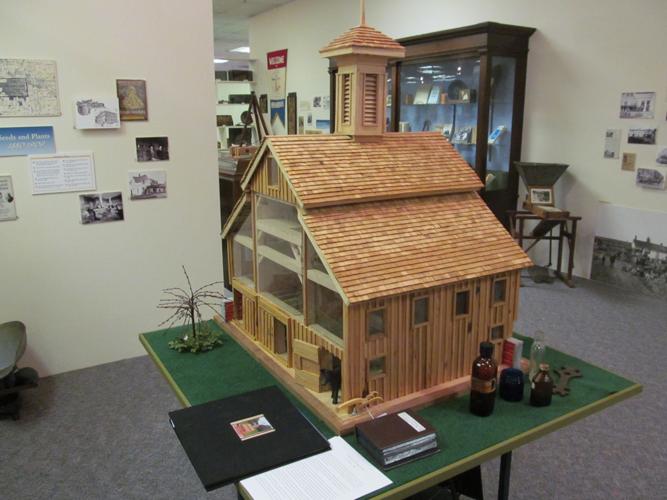 They couldn't save the old Lake Mule Barn, but this reasonable facsimile is located inside the Greater Shenandoah Historical Museum.

Long before Mustangs and Fillies roamed Shenandoah, mammoths populated the community. This giant mammoth skull--otherwise known as Homer--is on display at the Greater Shenandoah Historical Museum in Shenandoah.

A large display of fossils from digs near Shenandoah over the past 15 years is featured at the Greater Shenandoah Historical Museum.

This replica Mormon settlement cabin--similar to those that used to be found at Manti Park--is on display at the Greater Shenandoah Historical Museum.

They couldn't save the old Lake Mule Barn, but this reasonable facsimile is located inside the Greater Shenandoah Historical Museum.

(Shenandoah) -- A mammoth's skull, a cabin, a barn, and an entire house--these are items linked to Shenandoah's history all on display in one location. Part two of our special series entitled, "Little Known History of Shenandoah," reports on how the community's history dates back well before it was established before the late 19th Century.

Walking through the Greater Shenandoah Historical Museum is like strolling through a time warp. Mementos placed inside the former J.C. Penney's Building at the corner of West Sheridan and Elm Streets in Shenandoah trace the entire history of the community, which was incorporated back in 1871. But, many people don't realize the community's history dates back before then. A giant mammoth's skull and other materials unearthed in fossil digs over the years provide evidence of prehistoric life. Sally Brownlee has been the museum's curator since 2005.

"Sterling McLaren dug it up," said Brownlee. "At one time, he had this hanging in his family room. The kids named him Homer--so this is Homer."

Results of other digs by McLaren and other individuals are also another eyecatching display.

"The University of Iowa did a dig south of town, and they found some of the bones of a ground sloth," she said. "They found the bones of an adult, a teenager and a baby. The university doesn't let us have the bones, but we do have a plastic replica of one of the claws here."

Visitors can also learn about the little-known history of Shenandoah's Mormon settlement. Brownlee says a replica cabin of a settlement located at Manti Park is another interesting feature located inside the museum.

"It was a Mormon community," said Brownlee. "It was started in 1850. Then, about 1870, the railroad came through, and bypassed Mantai. Their leader, which was Alpheus Cutler, had died. A lot of them moved on. Some of them stayed here, some went to Salt Lake City, and some went to Independence.

Another historic structure connected to the community is the Lake Mule Barn. While the barn, itself could not be saved, a small model is on display inside the museum.

"The Lake Mule Barn, which is out by the cemetery at the Lake Nursery's location," she said, "was donated to the museum. It was in very bad shape, so we had to tear it down. But, Hayden Jones made us a replica of the barn made out of barn wood. He cut each piece by hand, and Ken DeBaere was his helper."

And, Brownlee says some of Shenandoah's unknown retail history is examined in a whole section saluting businesses past and present in the community.

"We start out in 1880--which is 10 years after Shenandoah was incorporated," said Brownlee. "We've had coal mines. Jay Drug and Brown's Shoe Fit are two of the oldest businesses here in town. Of course, this building, here, that the museum is in is the old J.C. Penney's building. Before that, it was the Delmonico Hotel--so, we have some artifacts from the hotel. Looks like we had an oil well around. Then, we have Eatons and Pella, and some of the other ones that are still in business."

Items highlighting Shenandoah's famous seed companies are also on display--and Earl May and Henry Fields were just two of the companies comprising Shenandoah's botanical background. Another fascinating portion of the museum gives perspective on life in the early 1900's--the recreation of an entire house.

"There's a grand piano which was brought up the Missouri River for a young lady who was in Fremont County," she said. "Music was very important to them back then. We've got Victrolas, and an old pump organ. And, we've had some of the crystal and china that they had in their dining rooms.

"We also have a toy room, which is fun to see--some of our old toys have been loved too much, I think," said Brownlee. "But, we have a bedroom with a Murphy bed in it, a kitchen with a wood burning stove, and a Saturday night bathtub."

That's just some of the community's little-known history found in the museum. Brownlee says the materials collected inside the building demonstrate the importance of preserving history.

"We've changed a lot since 1871, when we were incorporated," she said. "This is who we are. It shows how we've progressed and changed. Things are different now that it used to be. We like to show people how it was."

The Greater Shenandoah Historical Museum is open Tuesdays through Fridays from 1-to-4 p.m. The museum is closed in January and February. There's no admission charge, but donations are appreciated.