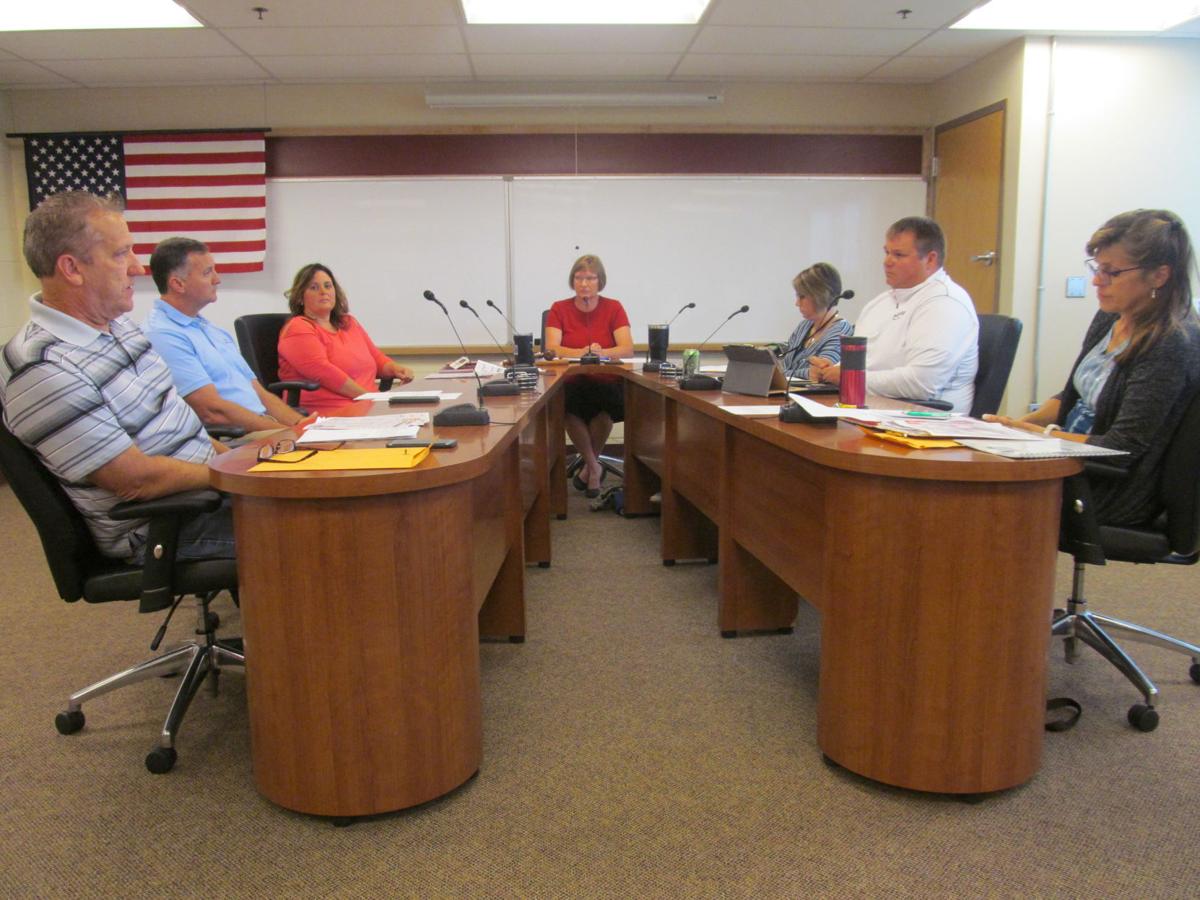 Shenandoah School Board member Kip Anderson (far left) states his objections toward a $14.7 million bond issue for an expansion and renovation at Shenandoah High School during a contentious board meeting late Monday afternoon. 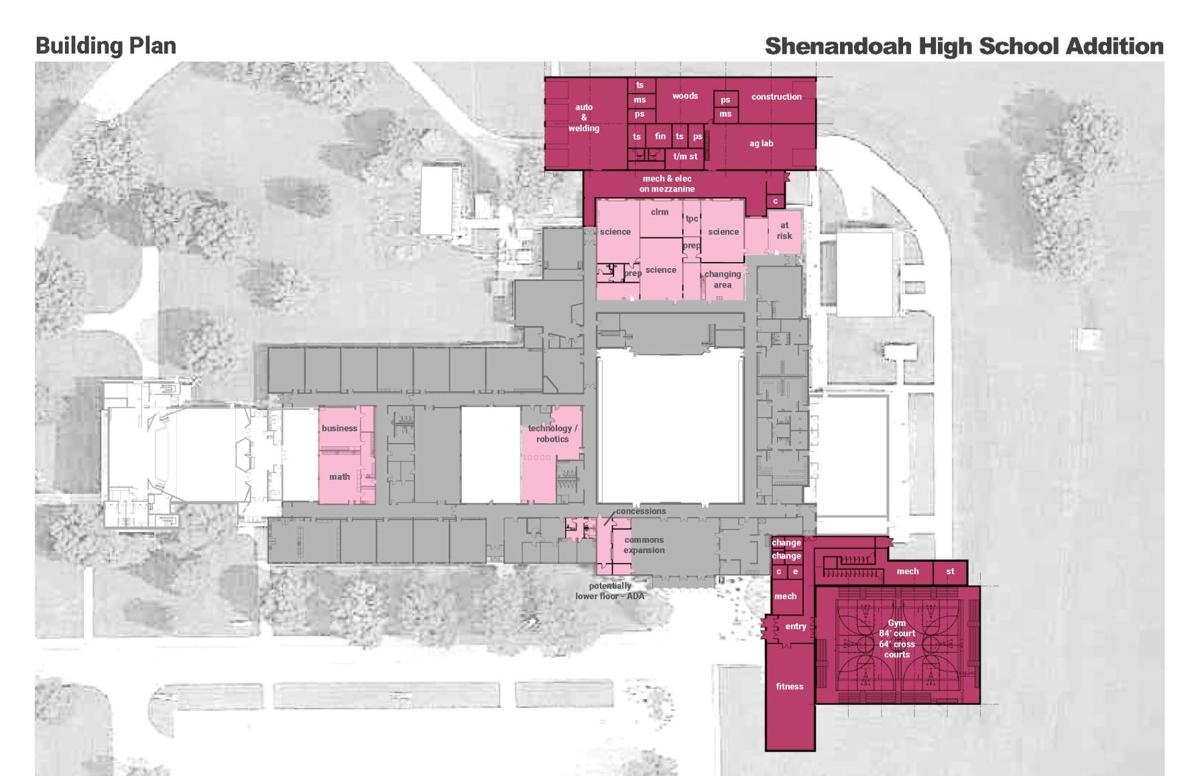 Shenandoah School Board member Kip Anderson (far left) states his objections toward a $14.7 million bond issue for an expansion and renovation at Shenandoah High School during a contentious board meeting late Monday afternoon.

(Shenandoah) – Shenandoah’s School Board late Monday afternoon set a special referendum for a major facilities project—but not after objections from one of the board members.

By a 4-to-1 vote, the board approved a resolution ordering an election on a $14.7 million bond issue on a proposed expansion and renovation of Shenandoah High School. Placed on the November 5th general election ballot, the referendum entails an expansion and renovation of Shenandoah High School. Included is a Career Technology Education, or CTE addition, as well as a new gym and fitness center facility. Also included is the "repurposing" of classes inside the high school covering STEM-related programming. STEM is an acronym for Science, Technology, Engineering and Math.

Board member Kip Anderson cast the lone dissenting vote, stating he could not support the bond issue as is. Anderson argued that not enough space was being devoted to the CTE expansion. He also objected to the gym’s inclusion on the referendum.

“It’s about education,” said Anderson, “It’s not about athletics or wants for a gym. It’s about needs for a viable CTE center in this community, in this area. This could be an area thing if we did it right—but it’s not going down that path. It’s underbuilt and overpriced.”

Anderson also criticized the board and the district’s administration for not pursuing a partnership with the Essex School Board—including a possible consolidation or construction of the CTE facility in Essex. He also said he would resign if the board sets the bond issue vote.

“Based upon that we have abide ethically by all board decisions,” he said, “I will not support this, and I will actually fight against it. I think it’s irresponsible. I don’t think it’s been thought out, and I don’t think all parties have been heard on this. I’ll just leave it at that.”

Anderson later made good on his threat by presenting a resignation letter. While saying she didn’t disagree with Anderson’s belief that the district wasn’t dreaming big enough on the CTE portion, Board member Kathy Langley expressed frustration over his comments.

Shenandoah School Superintendent Dr. Kerri Nelson later defended the decision to include the gym in an interview with KMA News. Nelson says the gym project was based on information from a facilities study, plus input from school district focal groups.

“We have one gym that was used for our main competition at the high school,” said Nelson. “We are short on gym space that’s adequate sized for competition. It makes it difficult for practice—I know we have some of our teams practicing as early as 6 a.m., and play late into the evening."

“So, those conversations came up in our facility committee, as well. They were discussed this summer as we talked several times about the project, and the proposal. Lots of discussion with the board over the summer. Sometimes, people agree with parts of it, and not all of it, but we did decide to move forward with this project, and include the gym,” she added.

Nelson also defended the space devoted to CTE programming in the project’s design, saying it was based on student participation.

“That’s really looking at the number of students participating,” she said, “what we know about the adequate space per student. That was included in our facilities study, and what they proposed. We looked at programs at Riverside, also in Columbus, Nebraska and Maryville, looking at different options that DLR had worked with. It’s sized for approximately 12 students participating at a time.”

In a related note, the board unanimously approved the issuance of approximately $5.8 million School Infrastructure Sales, Services and Use Tax Revenue Bonds to cover infrastructure improvements at the high school connected to the bond issue projects. Nelson says the move entails borrowing against the district’s Secure an Advanced Vision for Education, or SAVE revenues.

“The main purpose for borrowing against the SAVE funds,” said Nelson, “is really to focus on improving the HVAC system, ADA compliance, some areas of our parking lot, general safety things. It’s really about taking care of and maintaining the core of the building, and making sure that it’s well taken care of, and lasts into the future.”

The bond issue, which requires a 60% supermajority in order to pass, is on the same ballot as Shenandoah’s school board elections. Both Anderson and board member Greg Ritchey—whose terms expire with this election—have yet to return nomination papers. Candidates have until September 19th to submit petitions to the district’s secretary in order to run.