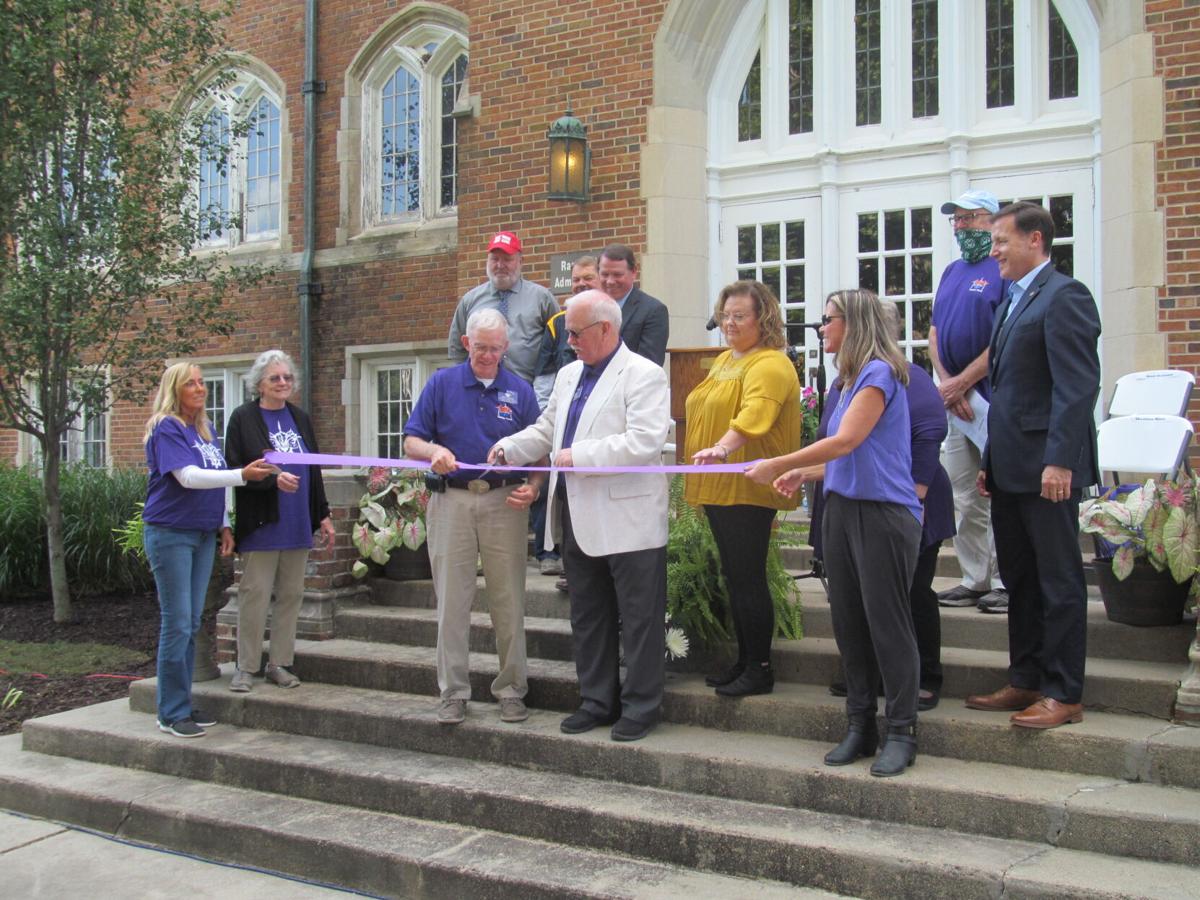 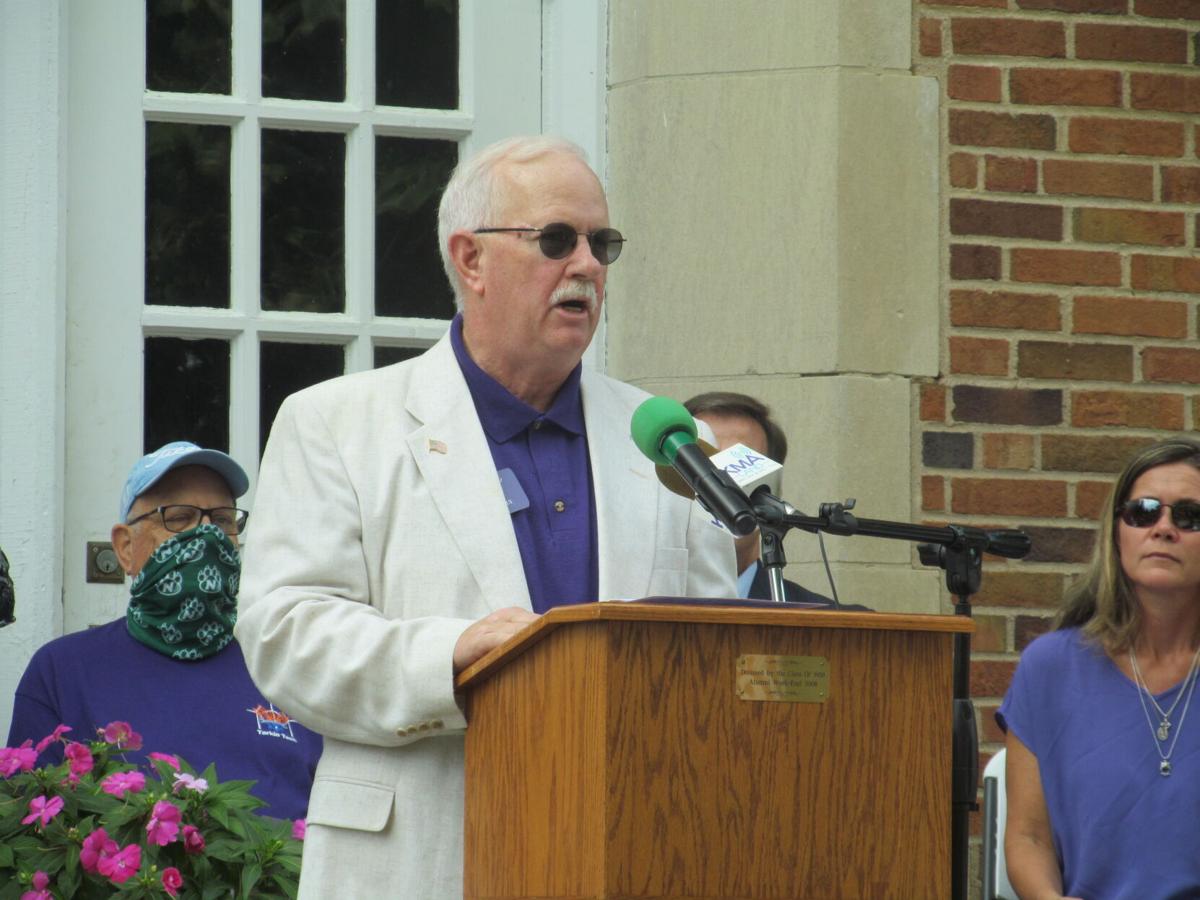 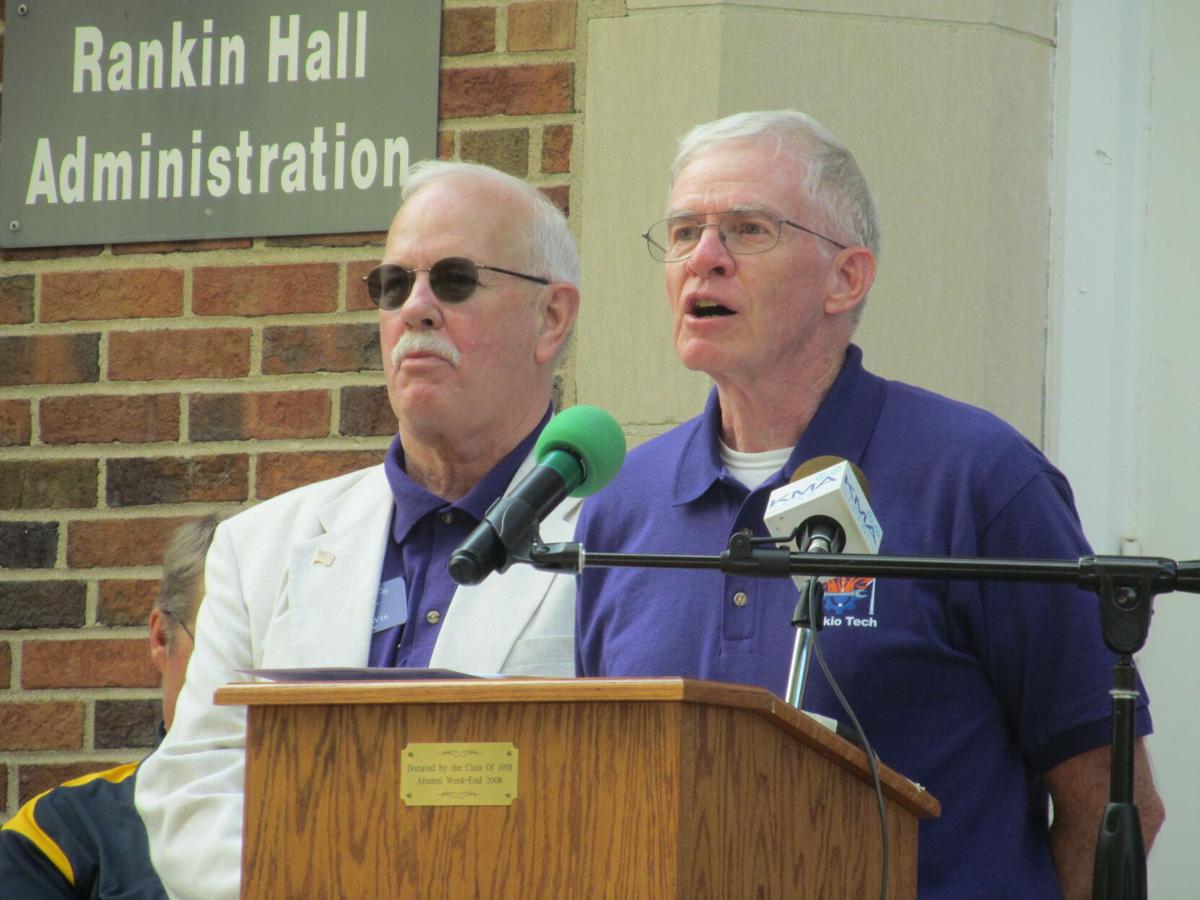 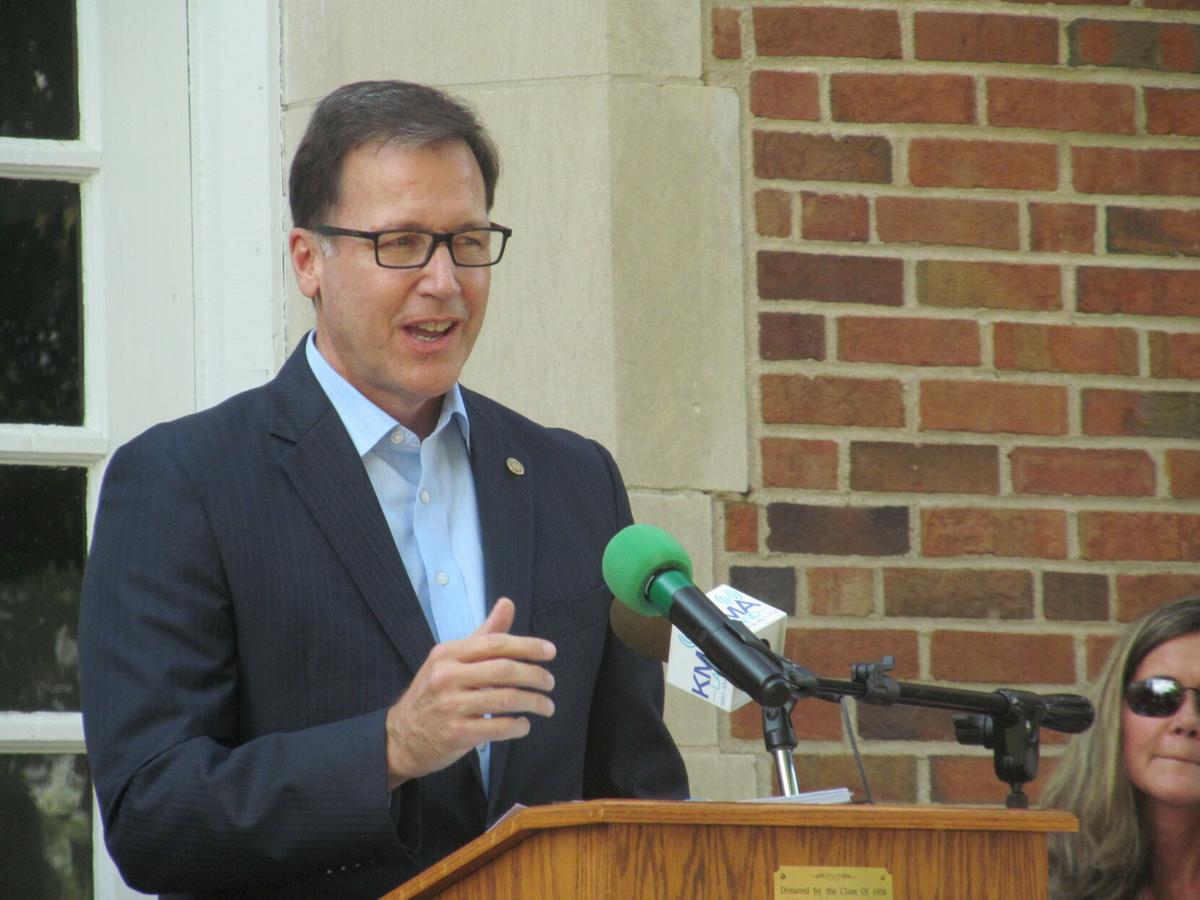 Missouri State Representative Allen Andrews was the among the guest speakers during Saturday's reopening ceremonies for Tarkio College, now operating as Tarkio Tech. 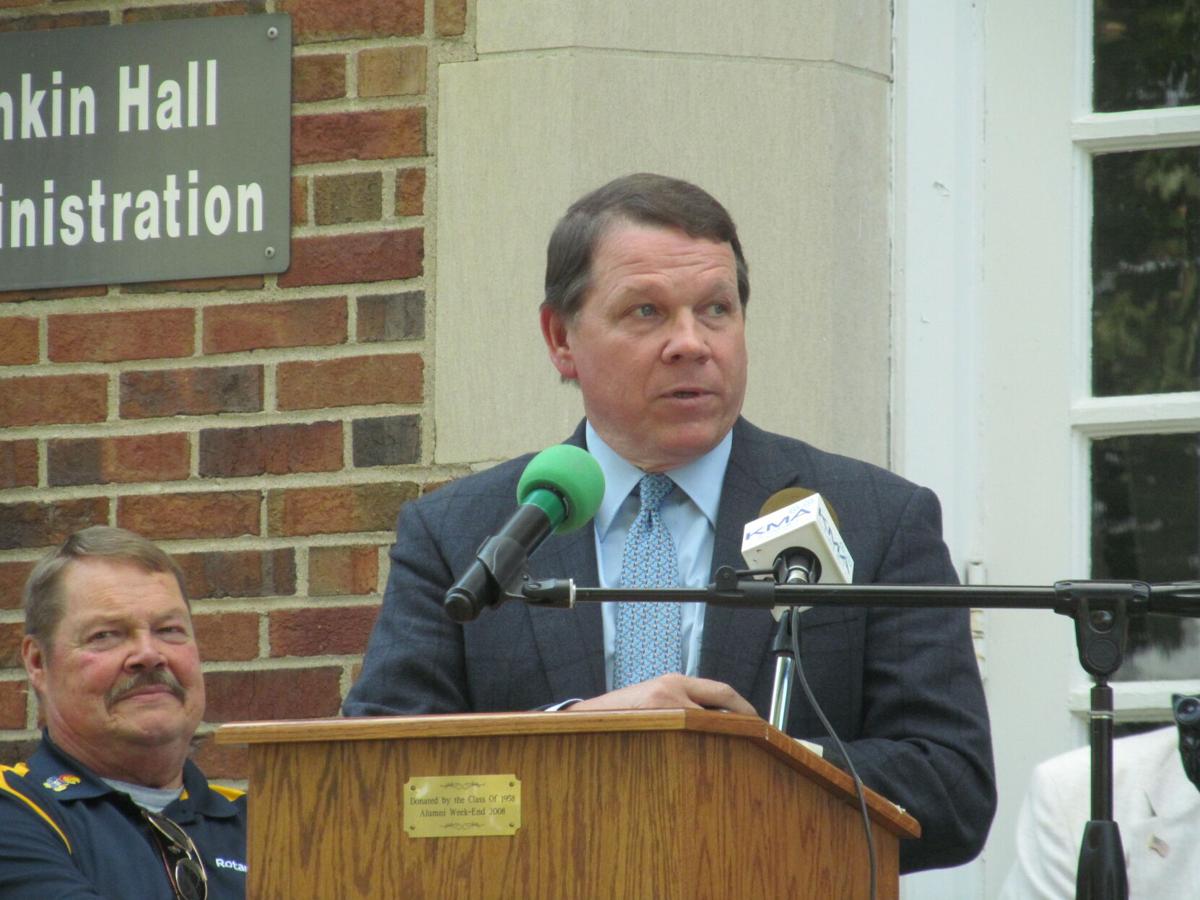 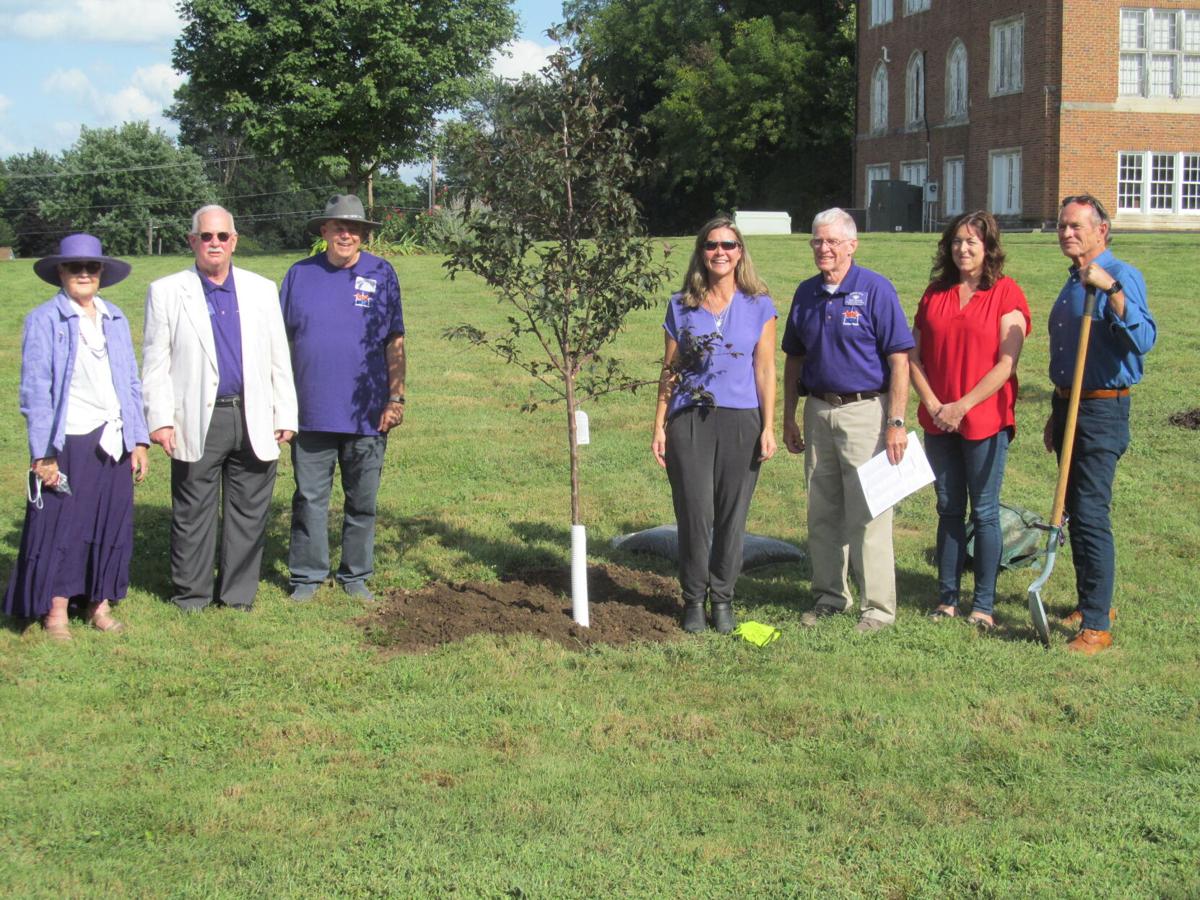 Members of the Tarkio College Board of Directors pose next to a tree planted outside the Thompson Learning Center, marking the school's reopening as Tarkio Technical Institute.

Missouri State Representative Allen Andrews was the among the guest speakers during Saturday's reopening ceremonies for Tarkio College, now operating as Tarkio Tech.

Members of the Tarkio College Board of Directors pose next to a tree planted outside the Thompson Learning Center, marking the school's reopening as Tarkio Technical Institute.

Dark clouds gave way to a clear, sunny sky for a celebration of the school's rebirth and rejuvenation. Local residents joined VIPs for ceremonies marking the reopening of the long-dormant campus as Tarkio Technology Institute. Activities took place outside of Rankin Hall due to COVID-19 safety protocol. An exuberant School President Johnnie Davis welcomed attendees to the college's new era.

"It has been a long, long, long time coming," said Davis. "But, make no mistake--we are open."

Davis says the school's reopening has been a longtime dream for many supporters, including the Tarkio College Alumni Association, Heartland Educational Institute, the Tarkio College Board of Directors, the city of Tarkio, Atchison County, and others in northwest Missouri, and a four-state area.

"When Tarkio College closed in 1992," he said, "it left a huge hole in our hearts, and in our economy. We hope that this reopening will begin to close that hole, and heal our region."

Since its actual reopening in January, Tarkio Tech has offered trade-oriented subjects, including welding, plumbing and--in the future--wind energy technology. Missouri State Representative Allen Andrews was among the ceremony's special guests. Andrews says the passion for the school stood out in the numerous meetings he attended over the years on its reopening. The Grant City Republican says the college is returning during a challenging time for academic institutions nationwide.

"What started as Tarkio College way back in 1883," said Andrews, "is an institution that has retooled, has refocused, and has reemerged to now be known to have changed their identity, to be coming out of this crazy time that we're in, having reinvented itself, and now being known as Tarkio Technology Institute--an up-and-coming modern-day technology institute right here in northwest Missouri. So, you are to be commended and valued for what you are doing, and how you are contributing."

Andrews adds Tarkio Tech is a boost to rural Missouri, at a time when it's struggling to find its relevancy.

"This institution has the capacity to once again reclaim its position as an economic engine," he said, "that will help revive our entire northwest Missouri region, and will add much-needed revenue throughout our entire state, as well as neighboring states like Iowa, Nebraska and Kansas, and beyond."

Northern Missouri Congressman Sam Graves, a Tarkio native, says the college's closing was devastating to the community. Graves recalled the previous attempts to reopen the school, including the former Tarkio Academy. Now, the congressman says the school has come full circle, and is back to what it's supposed to be--an institution of higher learning. Graves lauded the community and its leaders for not giving up on the college.

"It's the pride that the community has," said Graves. "It's the initiative that people take, it's that desire to see something done. But, more than anything else, it's the hustle--that's what it is--it's the hustle. It's people getting out there and hustling, and working tirelessly to make things happen."

"You know, I listen to businesses," he said, "and I hear businesses every single day talk about workforce, and they can't get enough workers, qualified workers, skilled workers, educated workers, to do the jobs that need to be done. So, that's exactly the role now the academy is going to fulfill."

Following the ceremonies, school officials and supporters presented another sign of the college's rebirth with a tree planting outside the Thompson Learning Center, where most of the preliminary instruction is taking place.