(KMAland) -- Wayne won the POI, Woodbine took the RVC, Harlan won in Griswold and Kuemper and LeMars were in Storm Lake in KMAland girls track on Monday.

Harlan scored 148.5 points to take their end of the Atlantic Co-Ed Relays. Glenwood was second with 134 and Atlantic took third with 124. Lewis Central’s 88 was good for fourth, and Abraham Lincoln had 57 in fifth.

View the complete results from the meet linked here.

Wayne was crowned the POI champion with 165.5 points. Mount Ayr took second with 140.5, and Nodaway Valley was third with 105. Central Decatur and Lenox rounded out the top five with 82 and 69, respectively.

Maddax DeVault ran to a win in the 100 hurdles (16.24) for Nodaway Valley. She also ran anchor for the shuttle hurdle relay (1:10.14) and was joined by Maddie Fry, Natalie Yonker and and Annika Nelson. Nelson and Fry also ran with Grace Britten and Emma Lundy in winning the 4x100 (53.87). 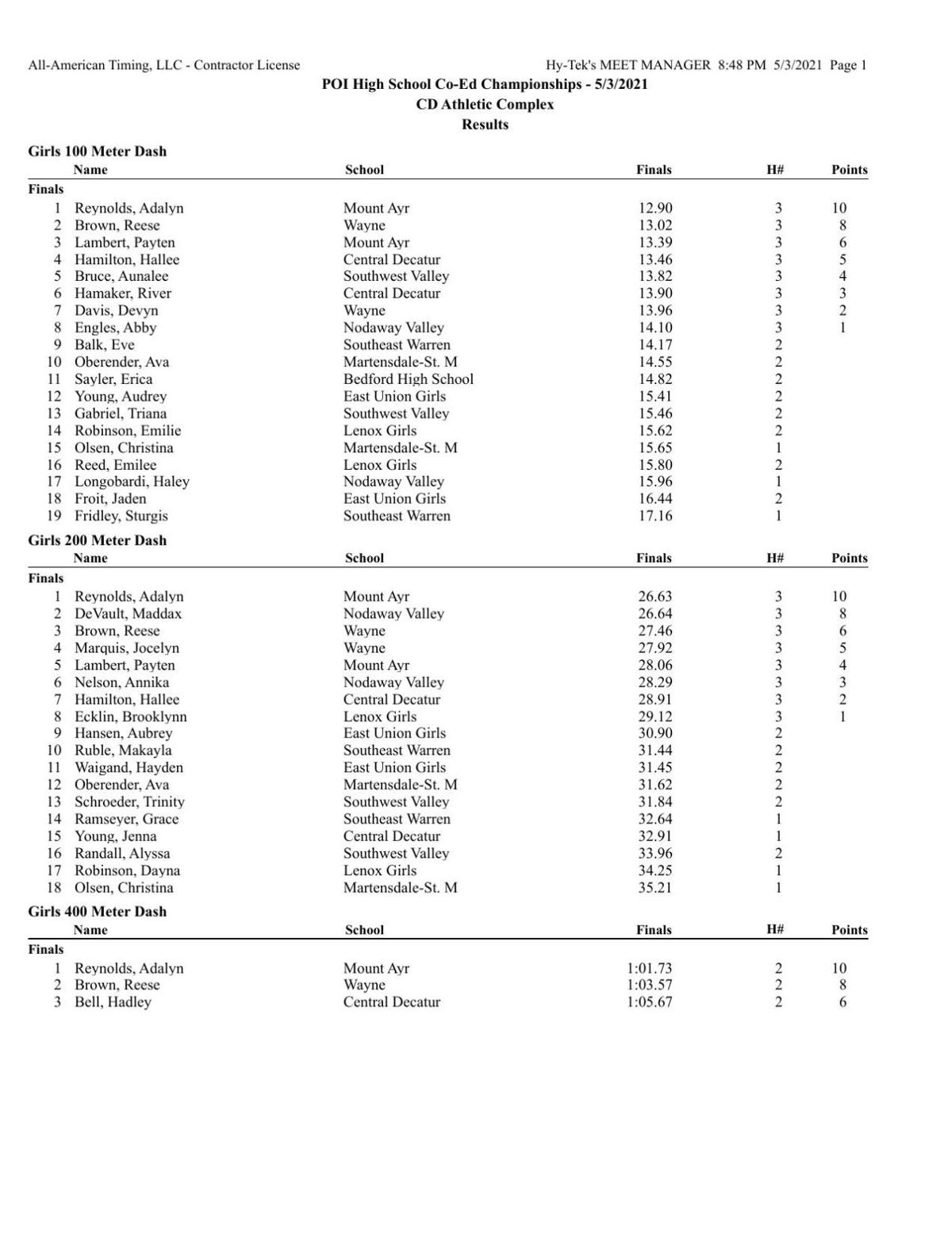 Woodbine scored 143 points to win the Rolling Valley Conference championships. CAM added 125 in second while Ar-We-Va had 79 in third. Glidden-Ralston’s 72 points were good for fourth, and Boyer Valley took fifth with 55.

CAM’s night was led by a couple record-breaking performances with Jade Jackson breaking the RVC record in the 100 hurdles (16.85), and Molly Venteicher doing the same in the shot put (39-02.00). Jackson also anchored the shuttle hurdle relay (1:13.49) to a win with Breanna Bower, Nova Wheatley and Abby Follmann.

Boyer Valley’s Lauren Malone had her hands in all three of the Bulldogs wins. She won the 400 hurdles (1:14.48) on her own and ran for the winning 4x800 (11:14.41) and distance medley relays (4:58.15). Malone was joined by Kylie Petersen and Jessica O’Day on both relays while Whitney Hartman and Anna Seuntjens ran for the 4x8 and DMR, respectively.

Exira/Elk Horn-Kimballton and Paton-Churdan had one win each. The Spartans’ 4x400 (4:43.64) team of Macy Emgarten, Gemini Goodwin, McKenzie Riley and Ella Petersen ran to a win. Paton-Churdan’s Danielle Hoyle won the discus (118-05).

View the complete results from the meet linked below. 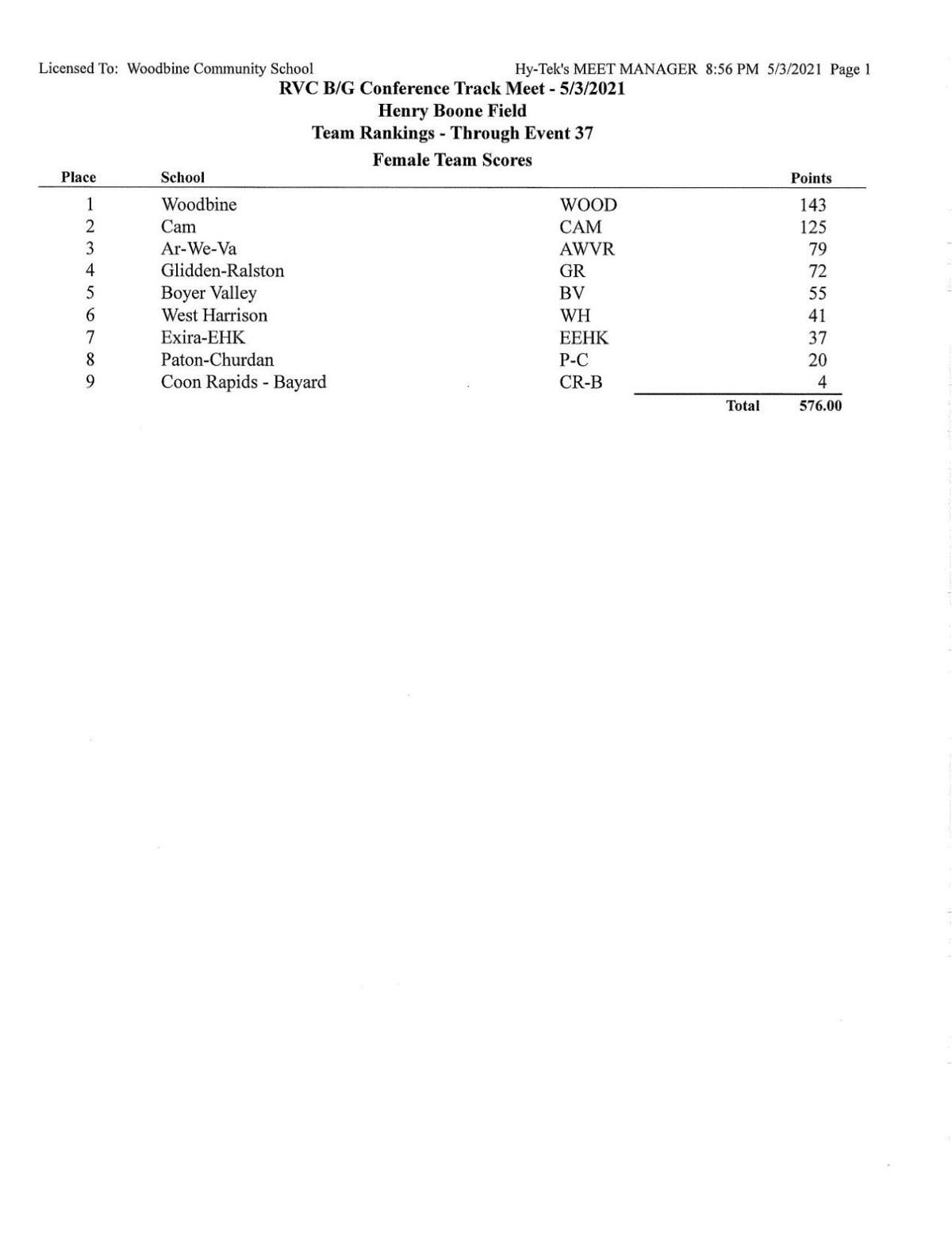 LeMars had 58 points and finished fourth in Storm Lake while Kuemper Catholic took seventh with 38 points. 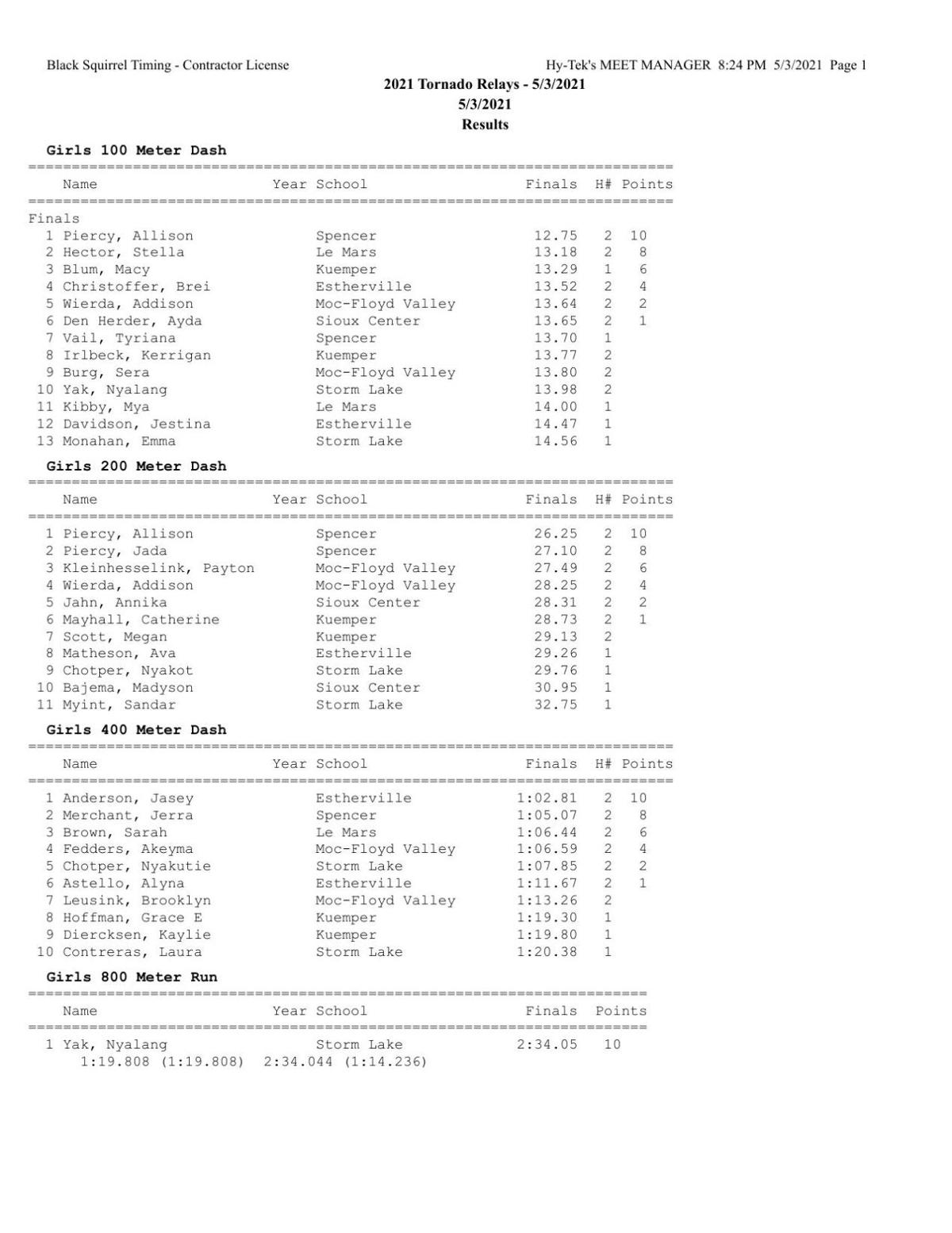