The Creston girls had a strong run in Perry at the Leon Fox Invitational, placing third with 95 points behind Ballard (20 points) and Winterset (82 points). Denison-Schleswig placed seventh with 180 points.

The Panthers were led by junior Braelyn Baker, who placed third in the race behind a pair from Ballard. Denison-Schleswig freshman Claire Miller added a 10th place finish while Paige Davis of Creston finished 11th. 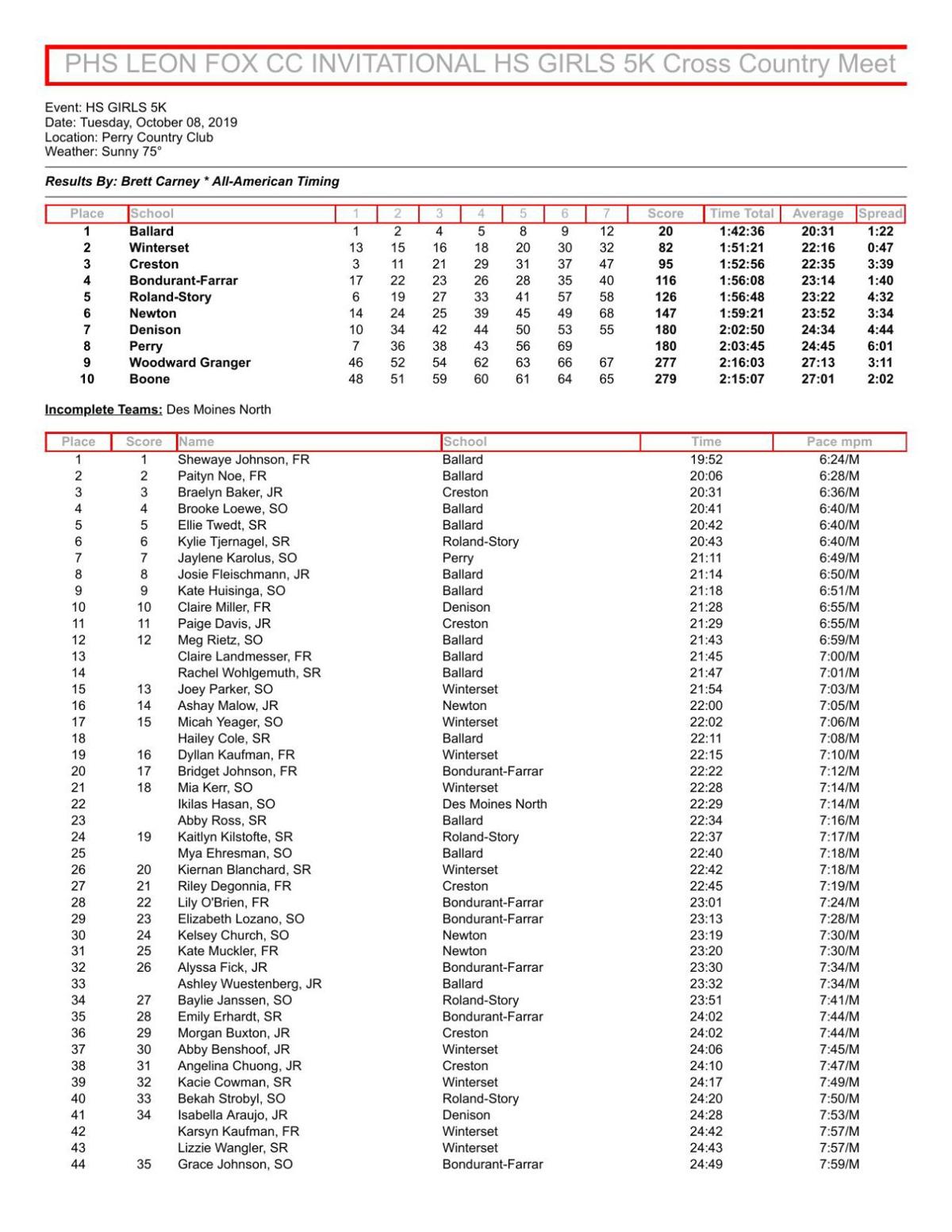 The Denison-Schleswig boys nabbed a fifth-place finish with 121 points while Creston had 227 in ninth place.

Leo Flores led the Monarchs with an eighth-place run while Clayton Stafford of Creston landed in ninth.

View the complete results from the girls and boys meet below. 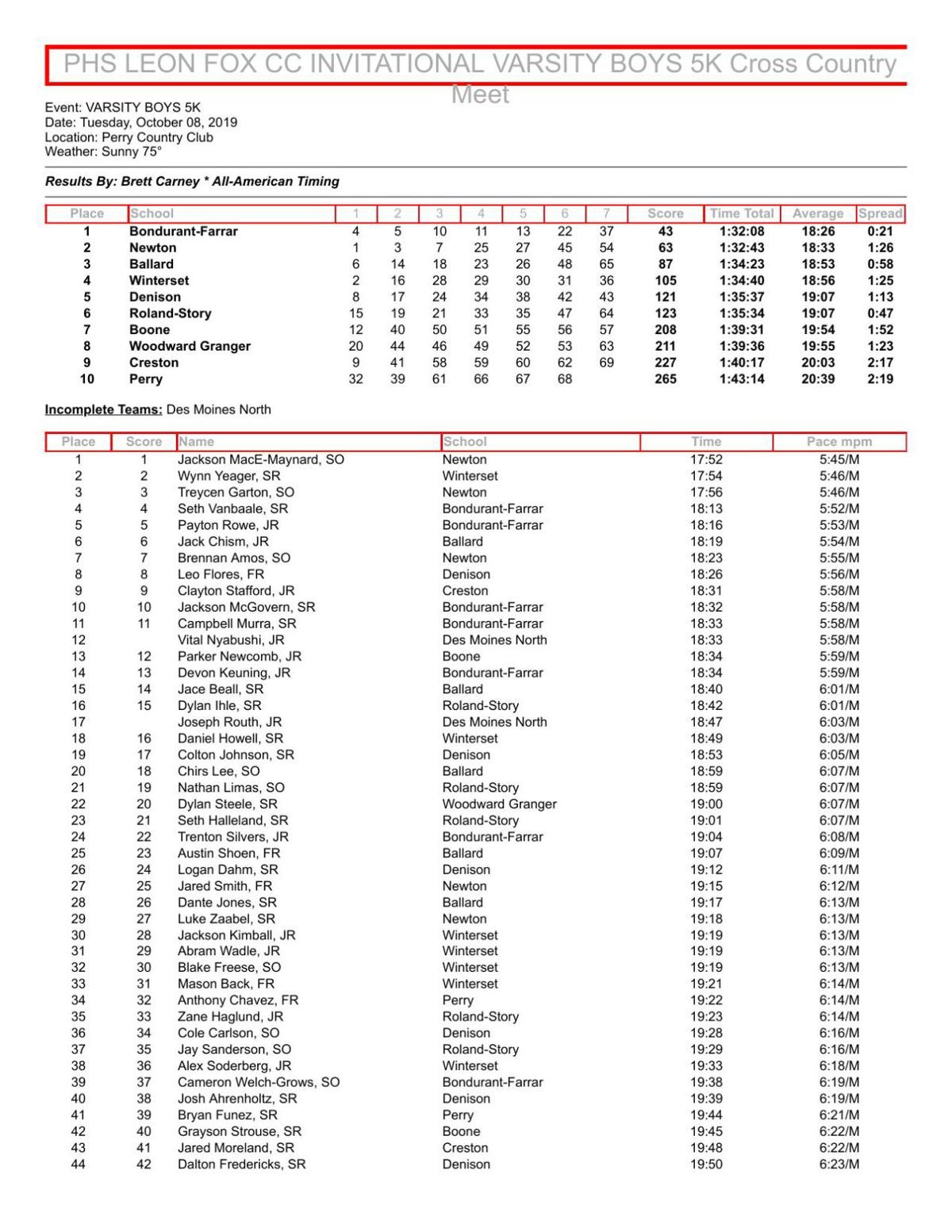 Kuemper scored 73 points to finish second behind Ogden’s 38 points. View the complete results from the girls meet here and the boys meet here.

West Harrison’s girls had 154 points at the meet to place sixth. Woodbury Central placed first with 20 points, running six in the top eight.

The high finisher for the West Harrison girls was Katie Gore, who placed 29th. View complete results below. 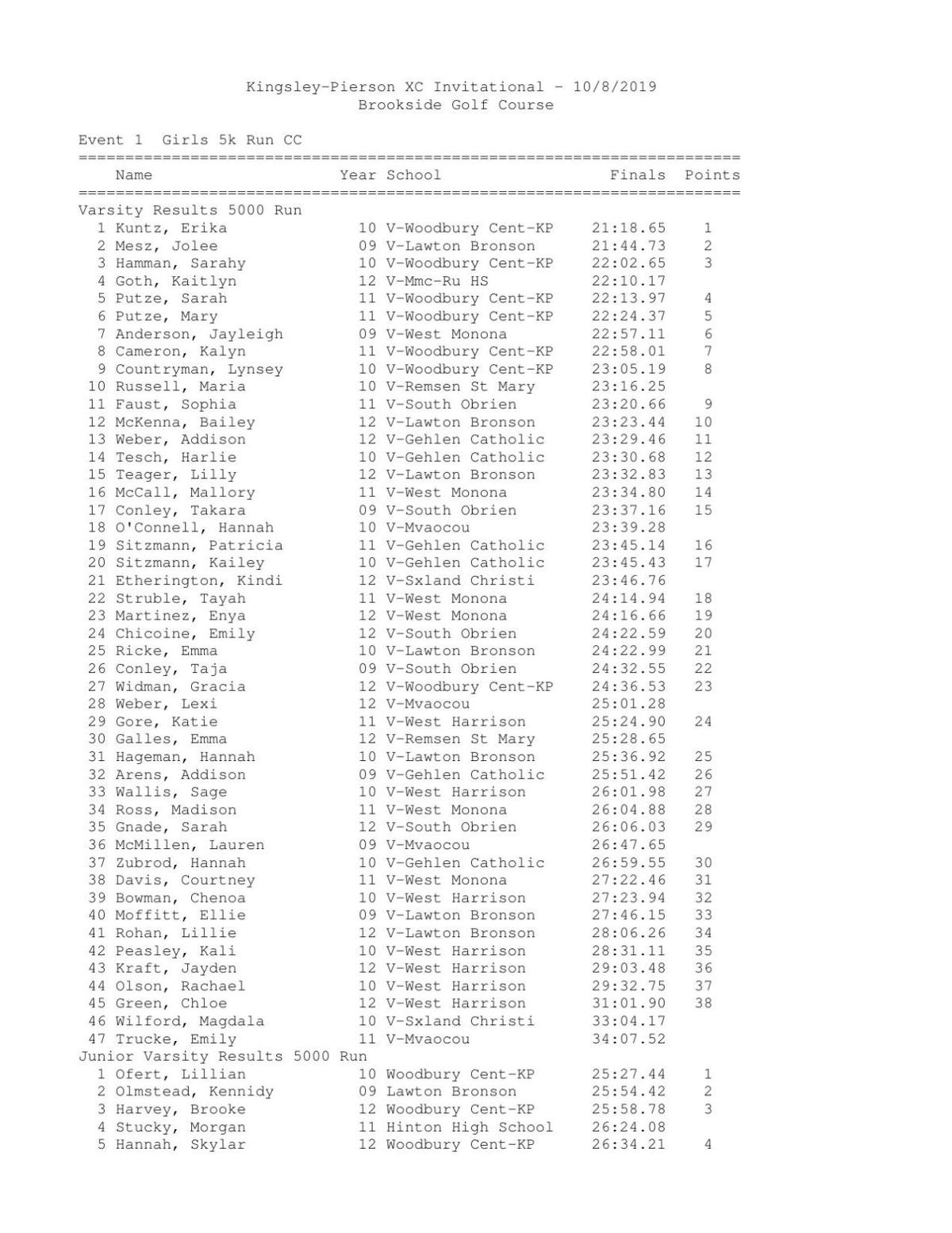 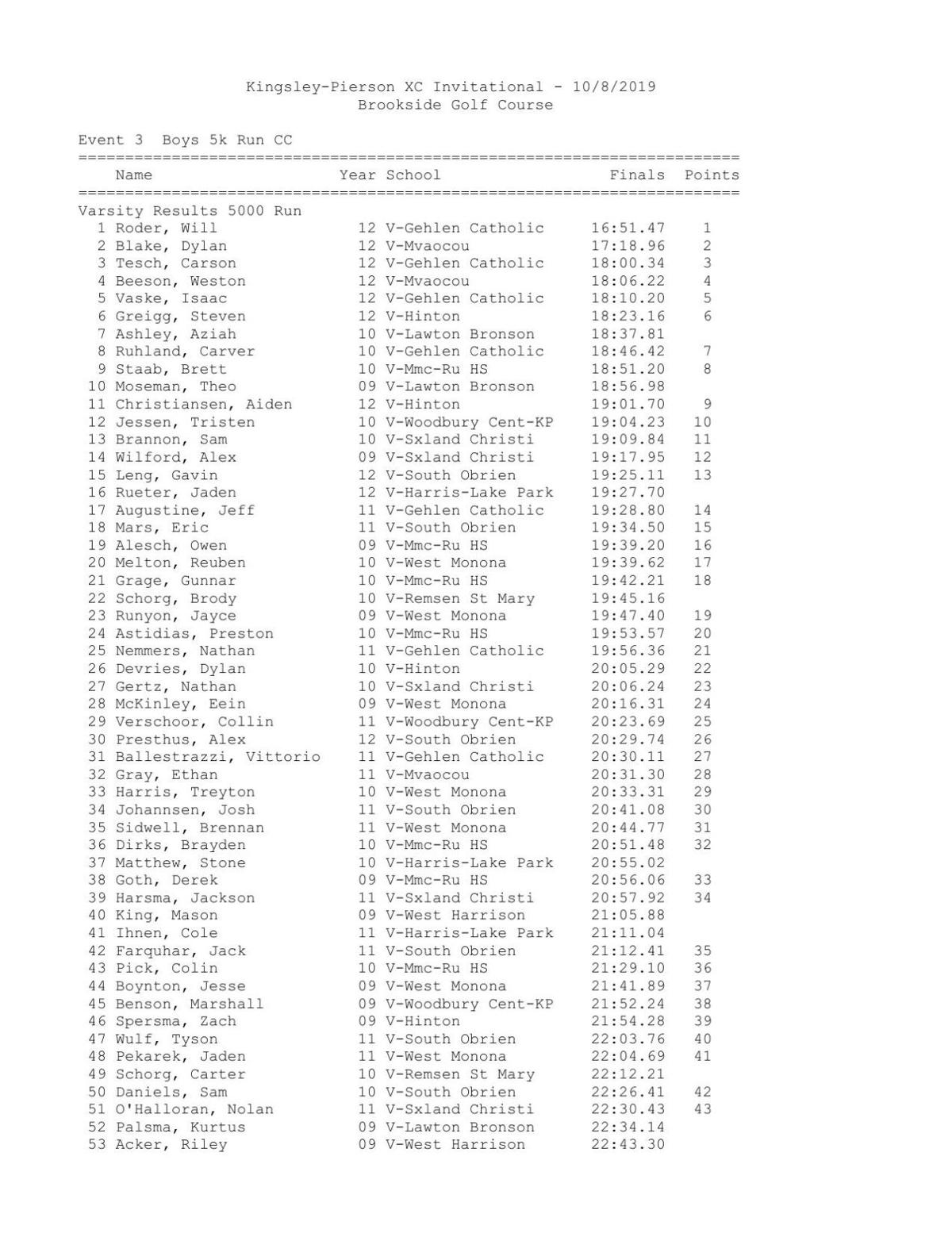 The Warriors were led by Halle Brester and Chloe Black, who placed second and fourth, respectively.

In the boy’s meet, Sergeant Bluff-Luton was fourth with 103 points. MOC-Floyd Valley also won the boy’s championship with 54 points.

Malcolm was second with 31, Louisville finished third with 46, Conestoga added 72 in fourth and Johnson County Central was fifth with 76. 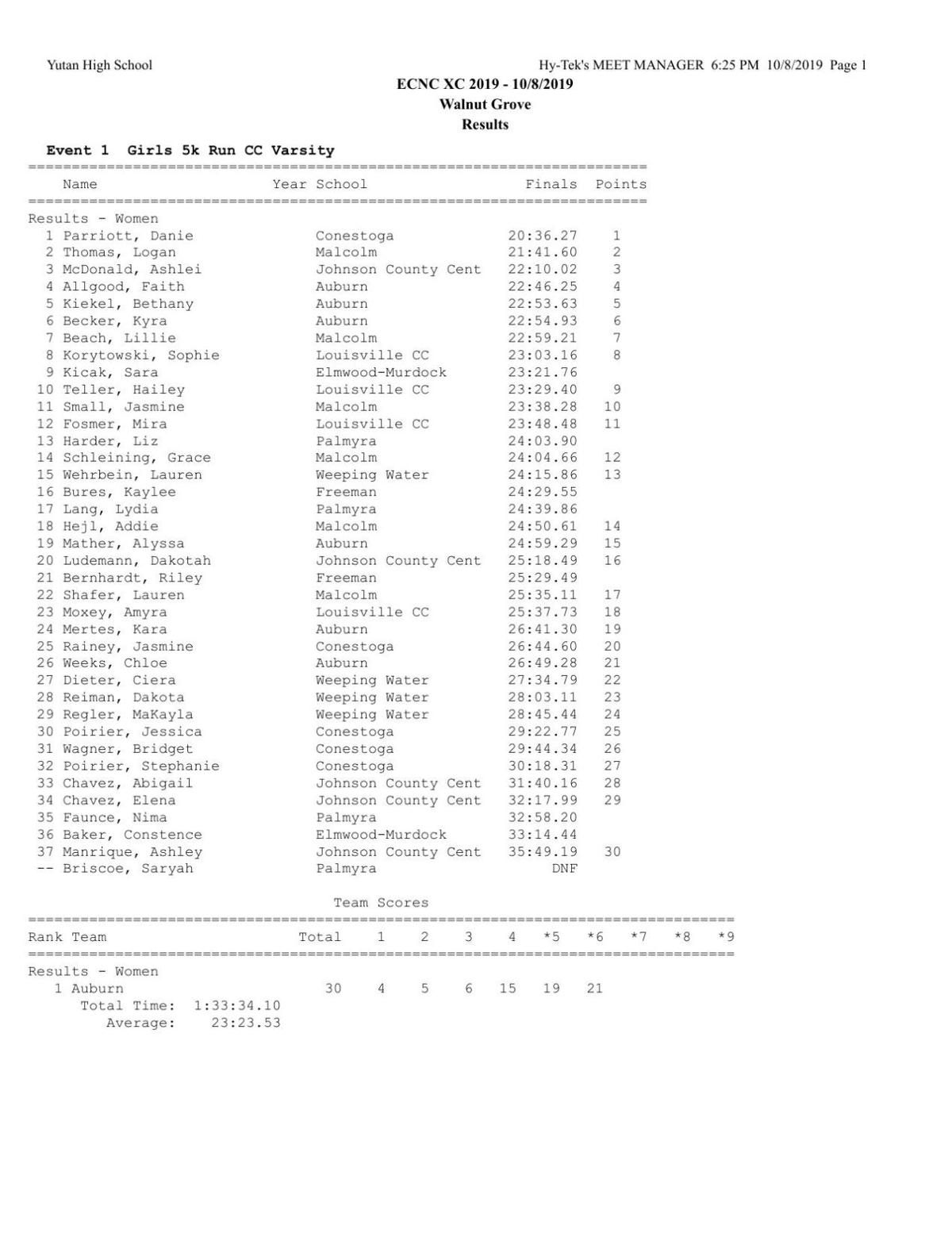 In the boy’s race, Malcolm had a perfect score of 10 to win the conference title. Auburn had 60 to take second while Conestoga also scored 60 in third. Freeman was fourth with 74, and Palmyra had a fifth-place finish with 103. 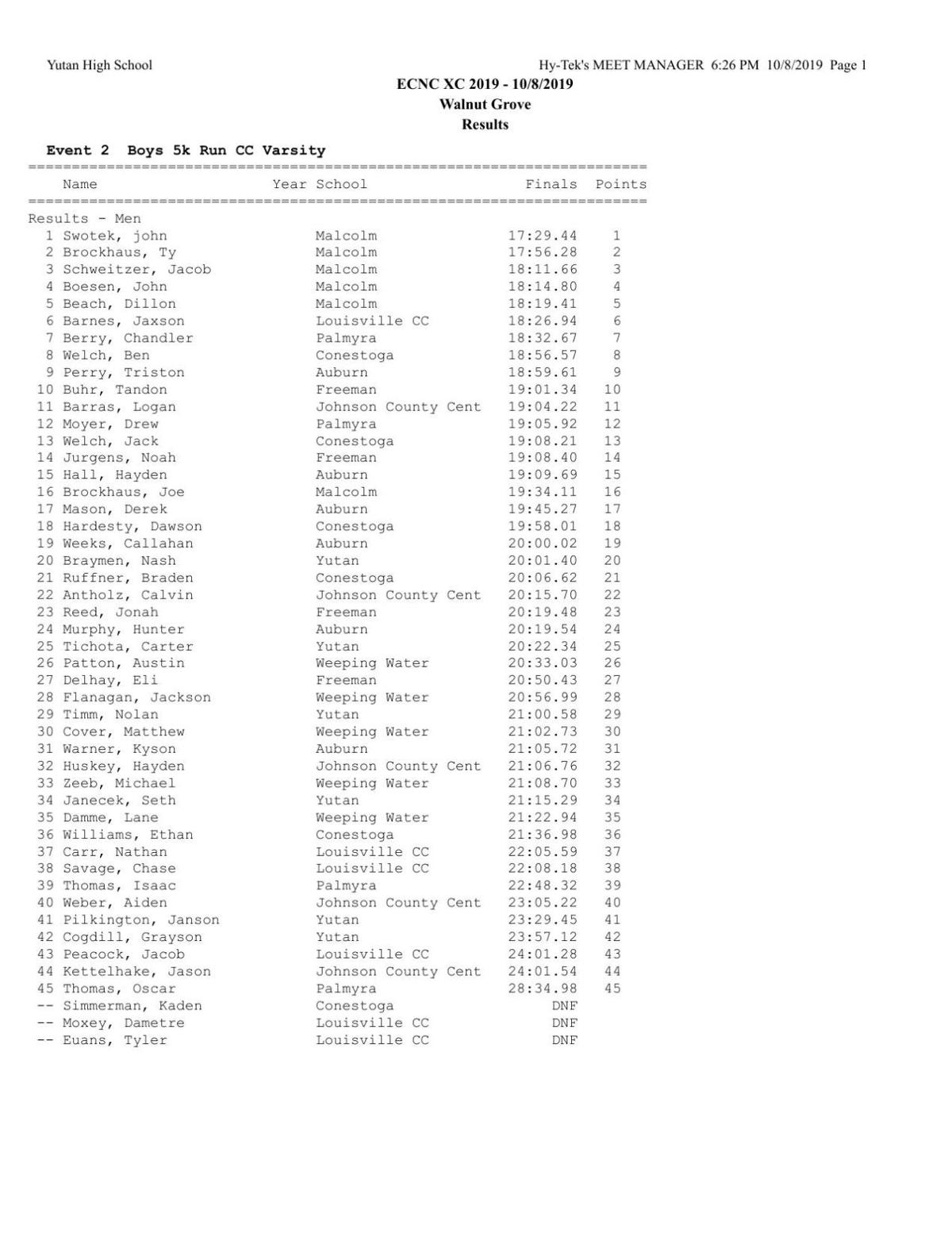