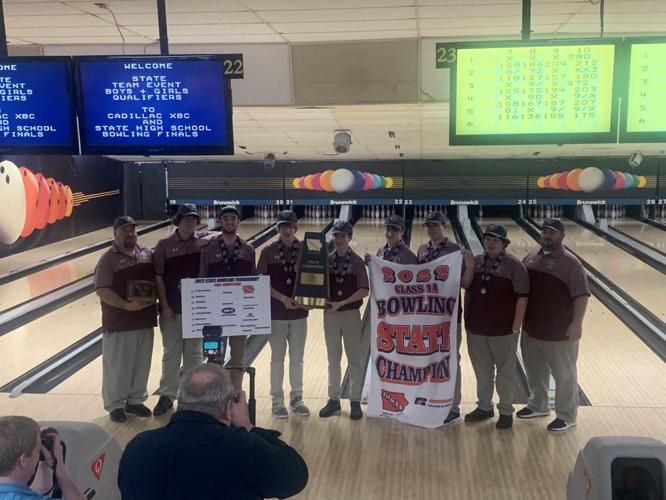 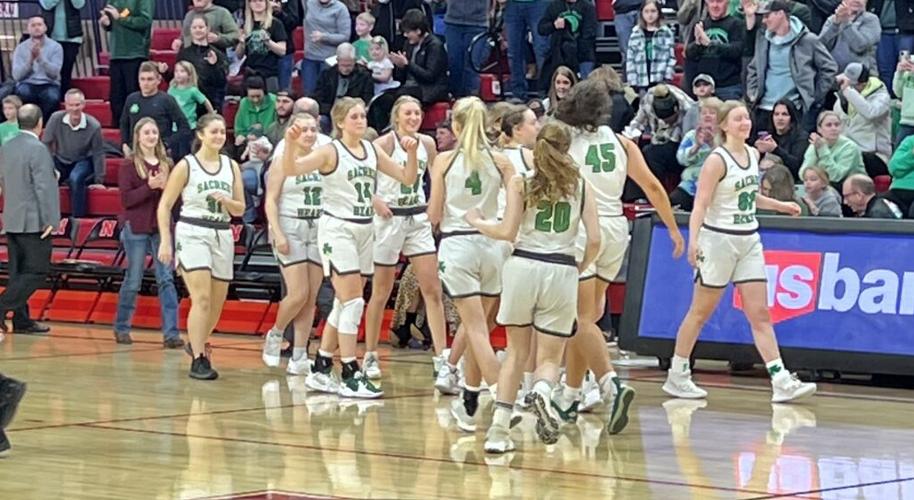 (KMAland) -- The KMA Sports Top 50 Team Countdown is down to only state champions. First up among the best of the best are the Shenandoah boys bowling and Falls City Sacred Heart girls basketball teams.

The upward trajectory of Shenandoah's boys bowling program reached a championship level in 2022.

While the end result was a championship, the Mustangs were more focused during the season on continual growth.

"I would say we've started the year off pretty decent," said Coach Darin Pease after his team's 3-1 start. "We've held our own. I think our best is yet to come. We are a very young group, but I think we will improve."

Four boys from last year's state-qualifying team were in the lineup this year.

"I expected that core to be solid, and we have been," Pease said. "Filling in the last couple of spots has been a challenge. It's just a matter of picking who's hot at the right time."

"It's pretty special to me," Herr said. "I've been wanting to do that for a while."

Herr's perfect game was part of a 533 series and led his team to a third-place finish.

Before Friday, Herr had a career-high of 286. He admits his nerves were high as he chased every bowler's dream.

"I thought I was going to mess around on the seventh or eighth frame," he said. "But everything worked out, and my team had my back the whole time. My last frame got me a little stressed out because it got quiet, but it worked. I knew it was perfect when I released the bowling ball out of my hand."

The Mustangs qualified for state after taking first in their state-qualifying meet.

"(I'm) pretty proud of the crew," Pease told KMA Sports. "During our Baker games, we were going pretty good. We had a little bit of a letdown. Clarinda was hot. They got really hot. We turned around and bounced back the next game. We never gave up. We kept fighting. Our last five games are maybe the best five Baker's we've done all year. It was a great time to jump that up a little bit."

At state, the Mustangs pieced together a remarkable run.

They drew the five seed in the new bracket-style format and opened with a 3-2 win over Maquoketa. They advanced to the finals with a 3-1 victory over Camanche and held off a Louisa-Muscatine comeback for a five-game win, securing the program's first ever state title.

"The kids bowled their hearts out," Pease said. "With the new format, things went our way, and we took care of our business. It's an honor to be up there."

The Shenandoah bowling program gradually improved in the last five years and now reached the pinnacle. Pease hopes his team cherishes this championship experience and makes the most of it.

"If you're not dreaming of the state tournament, you should probably do something else," he said. "You have to earn it the whole year. We are going to let these kids enjoy it. This doesn't happen every day."

“It’s still hard to put into words,” Pease said. “One of the biggest chips on our shoulder was being in little Southwest Iowa. There’s years and years where eastern Iowa has been the dominant area for bowling in the state. Going through our conference and schedule, (the Hawkeye Ten) turned into a monster, and that only helped us prepare for it. It really didn’t matter what team came out in front of us.”

Aside from Herr, Alex Razee, Dalton Athen, Gunner Steiner, Seth Zwickel and Dylan Gray made up the Mustangs' championship lineup.

The next program on our list is no stranger to championship glory.

The Falls City Sacred Heart girls basketball program added to their storied history this past spring with the program's seventh state championship.

The Irish cruised to a 24-3 record and qualified for state for the 26th time and 11th consecutive year.

“This year kind of started last March,” Coach Luke Santo told KMA Sports. “We came up short in the state championship (last year) against Humphrey St. Francis, and we only graduated one senior. We returned something like 90% of our scoring, so I think from that kind of point forward through the summer the expectations have been really high.”

Coach Santo returned a pair of All-State players in Erison Vonderschmidt and Rachel Magdanz, who average 12.6 and 10.7 points per game, respectively. While those two have been key again this year, the Irish have had plenty of role players step up this season.

“Our role players have really developed this year,” Santo said. “We depend more heavily on those girls, and they’ve consistently been performing and knowing their roles. They give us consistent numbers night in and night out.”

Sacred Heart opened the Class D2 State Tournament with a 46-29 win over Wynot in the two program's ninth state tournament meeting in the last 11 years.

"Wynot was not a typical eight seed," Santo said. "We worked a ton on press-break and not getting sped up. I thought we did that."

Two days later, the Irish returned to the state finals with a 48-38 win over Sterling behind a 22-point performance from Vonderschmidt.

Sacred Heart completed their championship quest the next night with a 43-33 win over Humphrey St. Francis, avenging the title loss the year before.

"I'm just so happy for them," Santo said. "You could see this was a talented group."